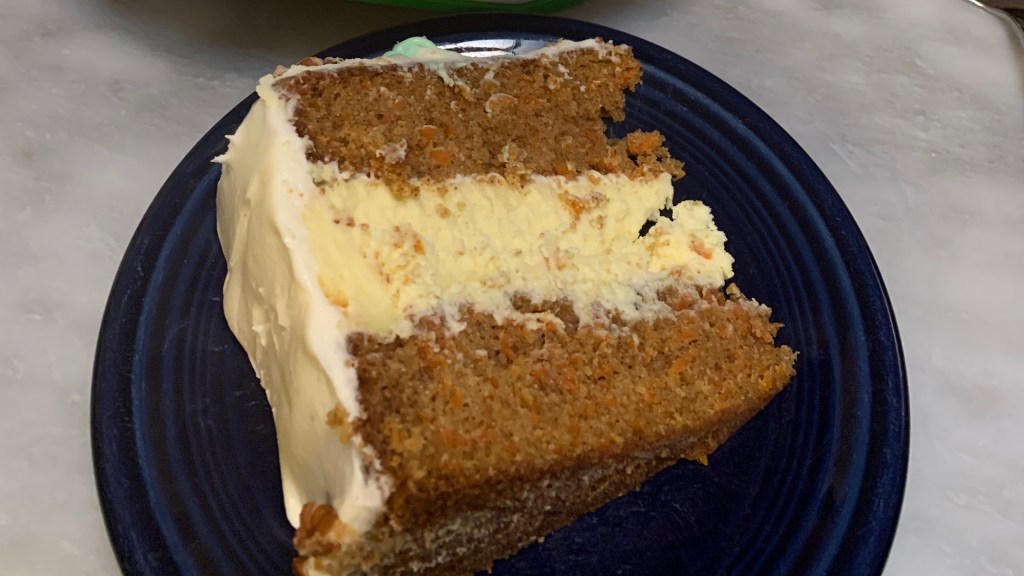 Would you eat carrot cake made with “imitation carrot chunks”? – Twin towns

GRANDMOTHER PAT, “formerly of rural Roberts, Wisconsin”, reports: “I recently made a carrot cake from a mix. Right on the front of the box were the words ‘With chunks of Carrot-flavored imitation”. I had a question: Chunks of what?

“I also noticed a confusing list of ingredients on a packet of ice cream bars. It was ‘vanilla ice cream with a chocolate flavored coating shell’. One more question: What was made of this cover?

“The third mysterious object was a box of frozen blueberry waffles. On that box was a listing that described “blueberry flavored nuggets and elderberry juice for color.” There was no indication of the composition of the nuggets.

“I guess I have two choices: start cooking again from scratch, as I have done for many decades, or look the other way when handling food packaging.”

Until death do us part

NORSKY writes: “I came across WAYNE NELSON’s picture and report from Forest Lake in the Sunday paper [Sunday BB, 7/17/2022] and I called my wife to look at the picture. I asked him, ‘Who does it look like?’ When she didn’t answer, I said, “Groucho Marx.”

“We used to watch Groucho on his game show ‘You Bet Your Life’ in the 1950s. It featured a secret word that was attached to a duck on a string that dropped in front of the contestant if he said that word during their conversation.When this happened, the contestant earned money in addition to the money they earned by answering their questions correctly.

“Jay Leno relaunched ‘You Bet Your Life’ this year. My wife and I laugh a lot watching it every day of the week. Instead of a duck, Jay uses a burst of confetti when the contestant says the secret word.

Life as we know it

“We moved to Clifton two years ago. We made our offer on this house a week after my mother passed away and a week before COVID hit. We closed the day after George Floyd died. It was a hectic time!

“Anyway, we have a really big yard now. I wanted a wildflower garden on one side of the driveway. I researched how to create one and dutifully staked out the space, covering it with black plastic last fall and throughout the winter. We have a LOT of wind here, so there have been several torn plastic replacements in this build. This spring, our neighbor offered to grow it for us. It measures 16 feet by 130 feet. In May, my husband told me that he thought we should plant vegetables. My unspoken thought was, ‘Why? You only like to eat corn and peas! But I am silent. I told her I wanted to save space for the wildflowers. I planted four kinds of sweet corn, Yukon Gold potatoes, carrots, lettuce, spinach, broccoli, two kinds of tomatoes (we don’t eat tomatoes, but hope to make some good sauce) , two kinds of peas, watermelons, cantaloupe and pumpkins. For some reason, few of the seeds planted on the hills sprouted, so I replanted them. They are now invading the garden! It’s very exciting! Pumpkins overtook spinach on one side and lettuce on the other. I grow pumpkins for the seeds only; last year I bought seven and ate most of the seeds myself. Also, I did not butt the potatoes. Hope we have a few more!

“I really didn’t know what I was doing while I was planting. The whole garden is a kind of experience. I spent hours feeding gnats and mosquitoes while getting rid of crabgrass and grass. And golf balls! I found more than a dozen in the plowed land. I believe the man who lived here was hitting balls near the house to the area that is now the garden.

“Our father was a gardener. We have always had corn, tomatoes, peas, strawberries, radishes, cucumbers, onions, vines, chokecherries, gooseberries and even peanuts in our garden in Mendota Heights! When they moved to Washington, the garden got smaller, but he got several apple trees that he trained to grow along their fence so he could reach the apples. My parents always had homemade juices and jams. Dad also made wine and root beer. I hope we can channel my parents a bit when we bring in our harvest.

“The other day, my brother and I were cleaning our mother’s house. She had just moved into an apartment in a residence for the elderly.

“In the bedroom, I spotted a cute little table, and on it was a nice wooden box. As mom collects small and pretty boxes, it was not a surprise. The box was approximately 6 inches high, 5 inches wide, and 5 inches deep. It was heavy. I spotted a label on the top. Curious. Then I read the label. It said: “Cremains of Virginia Johnson.”

“I found Grandma!” We never knew mom had grandma’s ashes.

“My brother took the box, read the label and tried to give it back to me, saying, ‘You’re the eldest, you keep it!’

“My wife and I go for evening walks in the neighborhood near our home. Sometimes we take a path that crosses a wooded area near a lake. At one point along the way is a runoff overflow pond.

“The pond is about 150 feet by 50 feet and probably 4 to 5 feet deep at most, and is surrounded on all sides by a fairly steep embankment tangled with weeds, reeds, brush and trees which have become thick and high over the years. The water is almost covered with a layer of seaweed and water lilies. Despite this, it all makes for a very pleasant scene. And the ducks love it.

“Between the path and the pond, signs warn people that there should be no boating, fishing, skating or swimming. Better to help citizens be safe, of course. Someone added a wholesome joke under one of the signs: “Breathing optional”.

“I look at this set and wonder how anyone could get a boat in the pond, or even worse, how to get it out. And why would they want to put a boat in there, since there’s no no fish.

“It makes no sense to skate there either. There is no boiler room, it would be boring and you would have to crawl around the banks while grabbing dead brush to get out. Also, wouldn’t you know, located one block away is . . . a skating rink. Really.

“However, the panels must absolutely remain in place as they are. Prevention is better than cure. And it gives walkers a chuckle as they pass the little pond where activities they don’t want to do are not allowed.

Everyone is a copy editor!

DONALD reports: “Subject: They did it again!

“The front page of last Monday’s Variety section in the West St. Paul newspaper carried an identical headline to one that appeared not long ago in the same spot: ‘The 5 Best Things We Have made last week.’

“Because it was such a blatant mistake, I thought it might be a running joke.

“I dropped that thought when I followed the article to page E6 and saw this headline: ‘The 5 Best Things We Ate Last Week.’

Not exactly what they had in mind?

“At the recent 4th of July celebration in our city, one of the songs played during the fireworks was ‘Independence Day,’ recorded by Martina McBride in 1994 (I can’t believe it was a while ago). so long!) As Rolling Stone magazine noted: “[I]It was easy to confuse the country song with the United States! UNITED STATES! anthem. It was titled after America’s most patriotic holiday, after all, and its irresistible refrain of “Ringing the Liberty Ring!” seemed tailor-made for the upcoming 4th of July celebrations in small towns. But the true meaning of “Independence Day,” written by Gretchen Peters and recorded by mighty singer McBride, has been lost on many listeners – the seemingly hit 4th of July holiday turned out to be a story of domestic violence and a woman’s drastic measures to escape abuse at home.’

“The refrain is: ‘Let freedom ring, let the white dove sing / Let the whole world know that today / Is a day of reckoning.’ / May the weak be strong, may the good be wrong / Roll away the stone, let the guilty pay / It’s Independence Day.

“Interestingly, ‘Sean Hannity used the song as the theme song for his radio show shortly after 9/11 until 2014; Sarah Palin chose it as her promenade song during her vice-presidential campaign.

“I’ve noted before how people type in a song title without paying attention to the lyrics and use the song inappropriately (‘I Will Always Love You’ is about breaking up, but people want it all the time for the music of wedding.)

“As Herman’s Hermits sang: ‘Listen, people!’ (Wait, too bad – the lyrics to this song don’t match what I’m trying to say either!)”

Al B of the Hartland Division

“April is one of the cruelest 12 months of the year.

“If they want to speed up baseball games, MLB umpires should call a batter every time a fan in the stands catches a ball.

“If you’re being chased by a mob of angry taxidermists, don’t play dead.

“If I were a spy, tying myself up in front of a television broadcasting one of the 24-hour news channels would quickly have me spilling the wick.”

(2) “Do you sometimes feel like you’re the only one with too many pictures? Comfort; we are at least two. You and I are in this together, and I’m happy to have your company. I have thousands of photos of birds, mammals, insects and wildflowers for use in magazines and newspapers, but I’m about to delete most of them. I’m like your brother who answers all emails – eventually. “Fix” means I’ll come back to it someday – maybe. . . but first I need to take a few more photos of these bald eagles on these two nests that look like upside-down Volkswagen Beetles in royal trees.

(3) “I make it a cardinal rule to watch every cardinal.”

(4) “I see organized groups tearing down our garbage ditches. They do a good job.

“I pick up litter when I watch birds and it’s been so many years that I can’t remember when I haven’t. I can’t pick it all up and I don’t try. I can pick up some of it, and I do.

“One day, I found an entire enclosure. He had not been crushed by a vehicle tire. There was no ink, but you can’t have it all.

“A woman asked me why I was picking up rubbish. She probably thought I had been sentenced to community service. “I’m birdwatching,” I said.

Name of the group of the day: The secret words

Medovik: the famous and mysterious honey cake of Russia