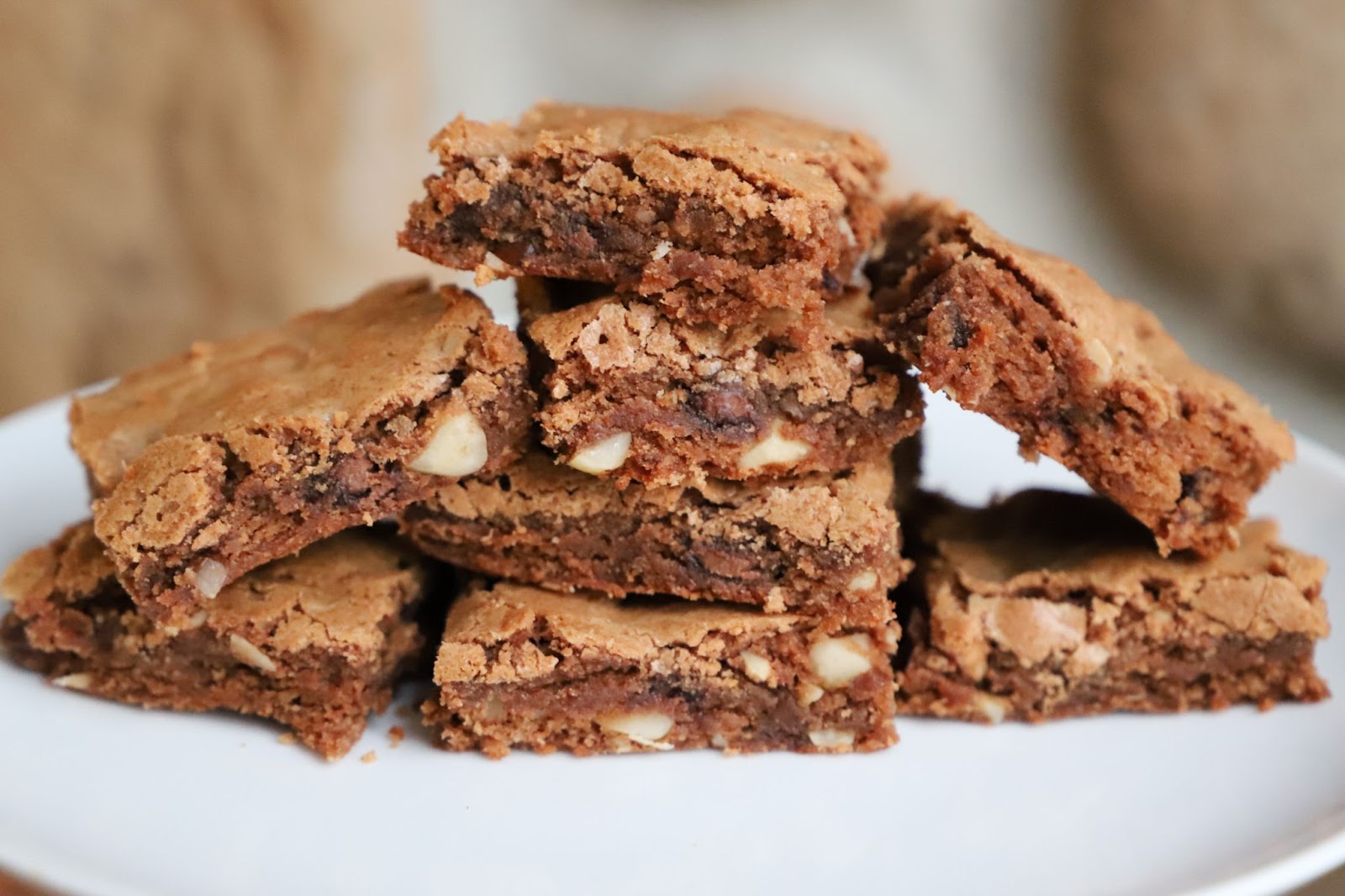 
We recently shared nostalgic posters from the Ninth Avenue International Food Festival and asked for your memories. In response, reader Sherrie Allan shared her copy of the 1974 Ninth Avenue Festival Cookbook. This seemed like the perfect opportunity to take some of those Hell’s Kitchen recipes and see if they could be recreated! Step up to the plate, Mackenzie Murray, who toiled in the kitchen hoping to cook up some history.

Brownies – a dessert we all know and love. There are now hundreds of recipes out there all claiming to be the best, meltiest, and richest brownies. However, it’s probably been quite some time since we’ve seen one that has no frills, simple ingredients, and is incredibly simple. It’s hard to find a recipe these days that doesn’t have more than 10 ingredients – personally, I like ones that don’t include espresso powder, 3 types of sugar, and molasses. That being said, this one is ancient and modern variations have come a long way. Reading it, my mom said, “Reminds me of a homemade brownie from years ago, actually.”

The recipe is as follows:

As you can see, this recipe is quite vague. It doesn’t say what temperature the butter should be at (cold, softened, or melted), or how long to cream the butter and sugar together. If I weren’t a self-proclaimed expert baker, I’d probably be freaking out, not knowing what to do with my butter. However, using my knowledge of history, I assumed the butter would be at room temperature, since I can’t imagine people refrigerating their butter back then. I creamed the butter and sugar together for 3-4 minutes which created a fluffy consistency.

The next step is to beat the eggs one at a time. Without further instruction, I beat them for about a minute until fluffy and fully incorporated. The next part confused me a bit: “add vanilla and chocolate that have been melted and cooled.” The preferred method for melting chocolate is to do so in a double boiler or in a small saucepan over low heat. I melted mine in the microwave to save time (which I don’t think they were doing at the time).

Then mix the rest of the ingredients. With only ½ cup of chocolate chips and 1 cup of nuts, the chocolate/nut ration was very uneven and I was unhappy with the lack of necessary chips. I also thought it was incredibly random that the recipe specifically called for milk chocolate chips. What’s wrong with semi-sweet or dark? ! If you love a nutty brownie then this amount will delight you, but I found myself hoping for luck and my bite would include a piece of chocolate. The type of nut wasn’t clear either, so I dug through my pantry and unearthed some Brazil nuts. I chopped them up and now think Brazil nuts are the new nuts.

Now the interesting part – baking the brownies. A 9″ x 13″ pan is large enough for the amount of batter. An 8″ x 8″ is definitely preferred for a thicker, gooier brownie. Baking the brownies in a 9″ x 13″ pan at 350 degrees for 35-40 minutes will lead to incredibly overcooked, even burnt brownies. They are also very thin, so they do not need to cook for more than 25 minutes.

The final verdict: thin, doughy, nutty, crumbly and not-so-chocolatey brownies, but still delicious and old-fashioned. Overall, this is a very simple but vague recipe on how to cook a traditional brownie. With just 8 simple ingredients, it makes a great base to modify and create an ideal brownie to suit your tastes.

And finally… What is Washington Beef – mentioned in relation to recipe creator Mrs. Lee Frank? Today, the company still supplies huge amounts of meat to America under the name Farm beef. At the time, they had a large retail store on the west side of 9th Avenue between W41st and W42nd Street. They were already a huge operation. In 1973, in the face of the meat boycott, Washington Beef was still ordering “the usual 11 freight cars, each containing 40,000 pounds of meat.”

In 1981, nearby buildings collapsed and made the front page of The New York Times.

Now Big Apple Meat Market is back in the same space on 9th Avenue.

Mackenzie Murray graduated from the Institute of Culinary Education in July 2021. After her time in culinary school, she worked as a pasta chain cook at the Michelin-starred Rezdôra. She now works as a culinary assistant and digital media coordinator for Gail Simmons.

Out and About WRAL.com