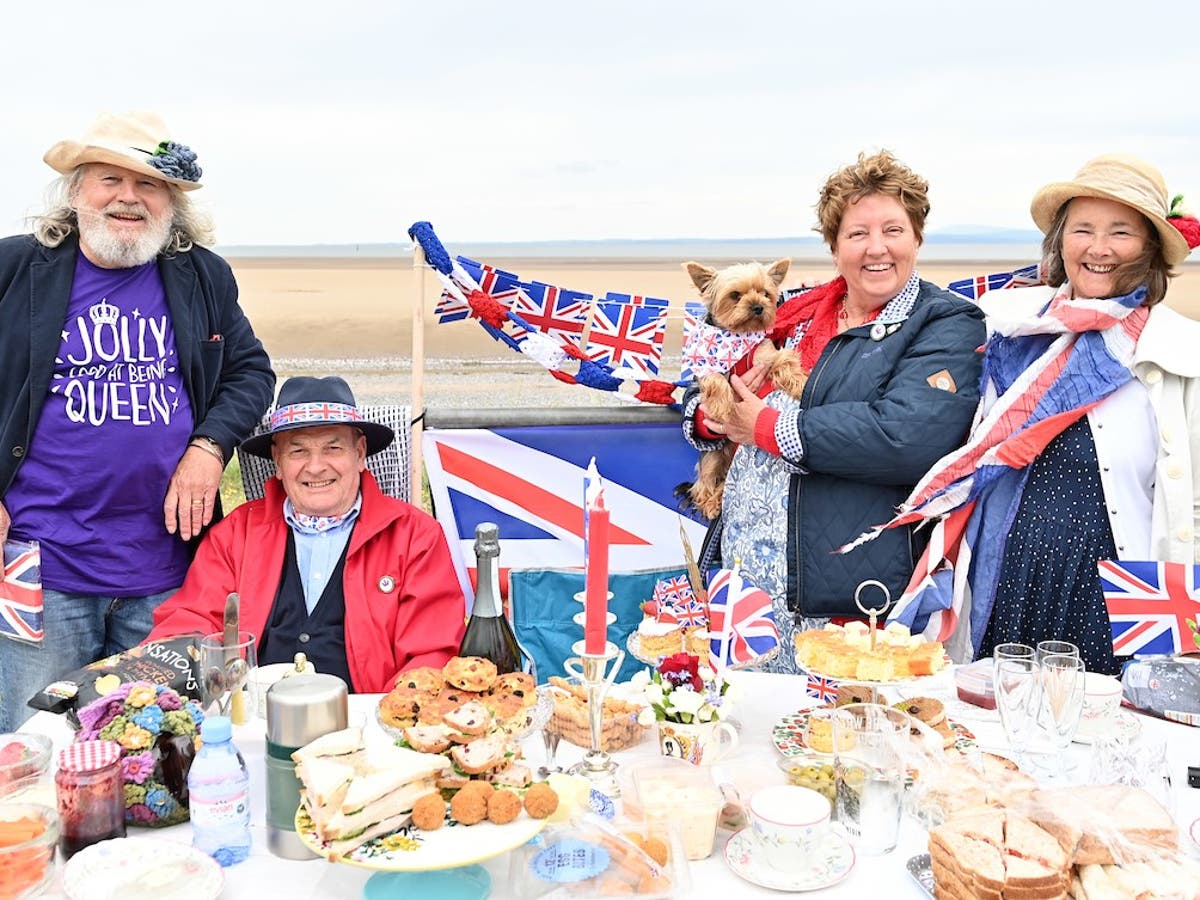 To say that Morecambe went the extra mile to celebrate the Platinum Jubilee would, strictly speaking, be wrong. He traveled another 1.6 miles.

The Lancashire seaside town held the UK’s longest running street party to toast the Queen’s 70 years on the throne.

500 trestle tables were set up along the promenade with over 5,000 revelers seated to eat the lunches they had brought.

It all stretched so far that when The Independent walk from the first table (just past the lifeguard station) to the last (past the old Frontierland theme park) took just under half an hour.

“We knew there was a place in Devon that was having a 1.5 mile street party for the Golden Jubilee in 2002,” said Luke Trevaskis, chief executive of Morecambe City Council. “And we just thought we had this beautiful long waterfront, so why not try to break that record while giving the whole city a real unforgettable day?”

It was of course not the only street party this weekend.

Some 12 million people are estimated to have attended 16,000 events nationwide since Thursday. Prince Charles himself sat down for a Jubilee lunch at the Oval Cricket Ground.

But few gatherings of this type have been able to be as spectacular as this seaside party, organized by the city council with the help of the Eden Project.

“It was fantastic,” Trevaskik said. “It’s the people and the place. Break bread with your community in a truly special setting on a completely historic weekend. What’s better than that?”

The joy, perhaps, was in the effort people put into the mini-feasts they brought.

It wasn’t just a few supermarket sausage rolls and packets of crisps – although, as with any dining experience worth its salt, there were plenty of them.

Instead, as people began to settle in for the day, they produced tiered cake stands, porcelain tea sets, and wine decanters. There were platters of sandwiches, bowls of curry, Tupperware filled with salad and homemade scones. Cutlery, crockery and condiments – Branston Pickle, anyone? – were on almost every table, as were Union Jack flags. Vases of flowers had been brought by some. One group had gone so far as to install a candelabra – with blue, red and white candles, of course.

“Well why not?” asked retired office worker Margaret Riley when asked about her table’s unique centerpiece. “How often do you get to celebrate a platinum jubilee? Of course we wanted to make the table look special. I think the queen is worth a candelabra. She’s an icon.

The 75-year-old was just drinking tea from a cup given to her at school to mark the coronation in 1953. A family heirloom? “Not exactly,” replied her husband Stephen, a retired policeman. “I was cleaning out the garage a few months ago and found it with nails and screws.”

Deborah Skelly brought a 1950s clock to adorn the table she shared with her family.

Her daughter, Emma Haigh, pointed to the floor with a slight eye roll. “She also brought a vintage rug,” she says.

Sure enough, that stretch of walk was now temporarily under a rug.

“Well, if you’re going to be in something like that, my philosophy is to make the most of it,” Skelly said. “And it’s been lovely. We talked to a lot of people and met a lot of old friends, that’s exactly what this is about. They should do it every year.

It was a point of agreement with Emma Anderton.

The 34-year-old florist came with his family and friends. “I walk along this promenade every day and it’s so beautiful, but I can’t remember it ever looking so colorful and joyful,” she said. “That’s exactly what Morecambe needed after the last two years. It’s phenomenal.

This was helped by the weather, which was kinder here than elsewhere. While much of the UK was hit by showers, the worst in Morecambe was occasional strong gusts of wind.

“We wouldn’t be British if we were afraid of a little cold,” said Andrew Witelocks, who wore sunglasses and a Union Jack top with a woolen beanie and coat. “I remember there was a party like this for the Diamond Jubilee and it ruined the whole day. We still held on. We thought we would have fun even if it killed us.

At 3 p.m., everything began to end. It ended with the Lord Lieutenant of Lancashire, Lord Shuttleworth, cutting a special jubilee cake and smoke cannons – red, white and blue – being fired into the bay.

The bad news was that while the street party was indeed the longest ever in the UK, it was still a far cry from the world record: a 36-mile event along a German motorway in 2010. [Charles’] coronation,” joked Trevaskis. “We should go around Barrow.”

Still, all the same, there is some hope that this extravaganza signals something of a fresh start for Morecambe.

In 1952, when the Queen ascended the throne, it was still a thriving seaside town. Like most coastal areas of the UK, it has fallen into decline following the rise of cheap air travel.

Now there is widespread hope that it is on the rise again.

The Eden project is set to build a new £125million resort in the area, which city leaders say will attract 760,000 visitors each year.

“Morecambe hasn’t had it easy,” said Rosalind Forster, the town council’s tourism officer, who brought her family for lunch. “But you look around today, when there are thousands of people here in this beautiful bay, and the potential is obvious to everyone. The future is exciting again.

Easy cake recipes for the week ahead

A homemade ice cream recipe as delicious as it is simple