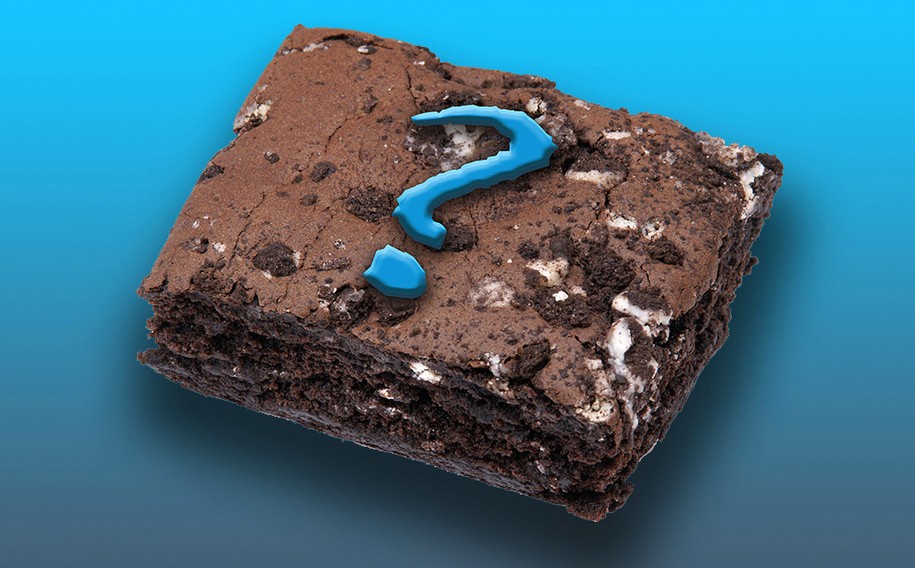 We had chocolate crucifixes made by the wife and daughters of a military commander, who were to accompany their macabre Easter celebration plan to put lipstick on the hands of servicemen in the commander’s unit to symbolize the blood of Christ on the cross. . We had “bagel dogs for the chosen people” used to lure Jewish servicemen to the “proud Christian” section leader’s Bible study. And now we have the latest food-related proselytizing program coming to the Military Religious Freedom Foundation (MRFF) – “mystery brownies.”

A few weeks ago, members of a large unit on a very large military base began noticing brownies being left around their workspaces. On these brownies, in blue frosting, were question marks. The question mark-shaped brownies continued to appear for over a week, their source and meaning unknown to the puzzled members of the unit.

Then, at the end of last week, it was announced on social media by one of the senior officers of this large unit that the meaning of the mysterious brownies would finally be revealed, and that everyone should come to the room main conference at noon to find out what that confusing question mark meant.

Now let’s say this happened in your workplace. Your curiosity would take over and you would show up, right? And that’s exactly what most members of this great military unit did. They showed up at the boardroom for the big reveal of those mysterious brownies that had been scratching their heads for the last week and a half.

The story of what happened next and what the confusing brownies meant is best told by one of MRFF’s 37 clients in the unit, who sent the following email thanking MRFF for getting the brownie officer punished… but… SPOILER ALERT… Jesus! …

I am an American serviceman stationed at a very large military installation here in the United States. I am the voice of 36 other MRFF clients in addition to myself who have been targeted by one of the 3 highest ranking officers in the unit to be proselytized to become “a Christian witness”.

Of our total number of 37 MRFF clients, 21 of us are Christians, including myself. In fact, my father-in-law is a preacher in a large church in our country of residence. The other servicemen are Jews, Muslims, Hindus, Wiccans, Navajos and atheists, agnostics.

Here is what happened. Two weeks ago, our unit, which is very large, started noticing chocolate brownies being left all over our work areas. They all had a blue question mark on them in the cake frosting. The mystery brownies were left everywhere starting 2 weeks ago and continued until the middle of last week.

Then at the end of last week, the mystery was solved. One of our 3 senior officers from our large unit took to social media to tell everyone to come to the main conference room at noon last week to get the answers to the “question mark” chocolate brownies “.

Some of us thought it was a reference to The Riddler from the Batman movies and others had different ideas. It was fun, we thought. Then the fun stopped

Of course, almost everyone made it to the large conference room at the appointed time. Then the ‘Major X’, I’ll call him, came in and said he and his wife had baked and passed out the brownies. He stood up in front of all of us and said that the “question mark” on the brownies was mainly meant to stimulate an answer rather than a question. The “answer” he gave was “Jesus Christ” and the underlying “question” was “if you were to die today, would you be in heaven with Jesus or burning in hell with Satan”.

My military colleagues and I were stunned by the silence and many began to leave the conference room in droves. Major X told us he was part of a group called ‘OCF’ which we found out stood for ‘Officers’ Christian Association’. Some people stayed behind to talk more with him unfortunately. (It also happened that we had a foreign military delegation visiting our base from overseas and they had to wait until Major X was done proselytizing with our lower rank troops before they could start using the large conference room facilities, which is very basic and wasted!)

Most of the time, we were all shocked that this “Jesus or hell” shit came from one of our superiors. A few of us, including, knew how to call the MRFF and Mr. Weinstein. We called him late at night, but he still answered his phone and immediately got into action for us.

Within 24 hours, Major X had been called to see our commanding officer with whom Mr. Weinstein had had a long conversation. It’s no secret what happened next. Because Major X came back after getting his ass kicked by our Commander’s Commanding Officer and publicly announcing to anyone within earshot that he was getting a Letter of Reprimand and he didn’t deserve this. He complained that apparently it was fine to have a Black History Month and an LGBTQ Pride Month, but “just let a Christian try to celebrate his faith and watch him go. crucify!”. Major X said he would “get a lawyer to fight this anti-Christian discrimination”.

Either way, we all thank Mr. Weinstein and the MRFF for handling this mess for all of us and getting our chain of command to do the right thing. Major X has a lot of power in our unit and no one wanted to try to stand up to him until the MRFF was called in and did it for all of us. Major X has never shied away in the past from wearing his Christian beliefs on his sleeve to those of us of lower rank, but what happened with those question mark chocolate brownies was a new low, even for him. It was so wrong and hurtful.

Thanks to the Military Foundation for Religious Freedom!
Don’t leave because we might all need you again very soon!

The organization the brownie-wielding ‘Christian witness bearer’ officer told the unit he was part of – the Officers’ Christian Association (OCF) – was unfamiliar to members of the unit, but was certainly familiar to us here at MRFF. This is an organization with chapters at virtually every military installation that believes the true duty of our military officers is not to protect and defend the Constitution, but to uplift:

“a spiritually transformed army, with uniformed ambassadors for Christ, empowered by the Holy Spirit.”

Yes, that was actually the official OCF mission statement until it was quoted so often by MRFF founder and president Mikey Weinstein in interviews that they changed it to something less indicative of their true purpose.

For all about the OCF and its machinations to “impregnate the ranks,” as one member described it—machinations that now apparently include the use of mysterious baked goods—see my 2011 HuffPost article, “A spiritually transformed army with uniformed ambassadors for Christ.”