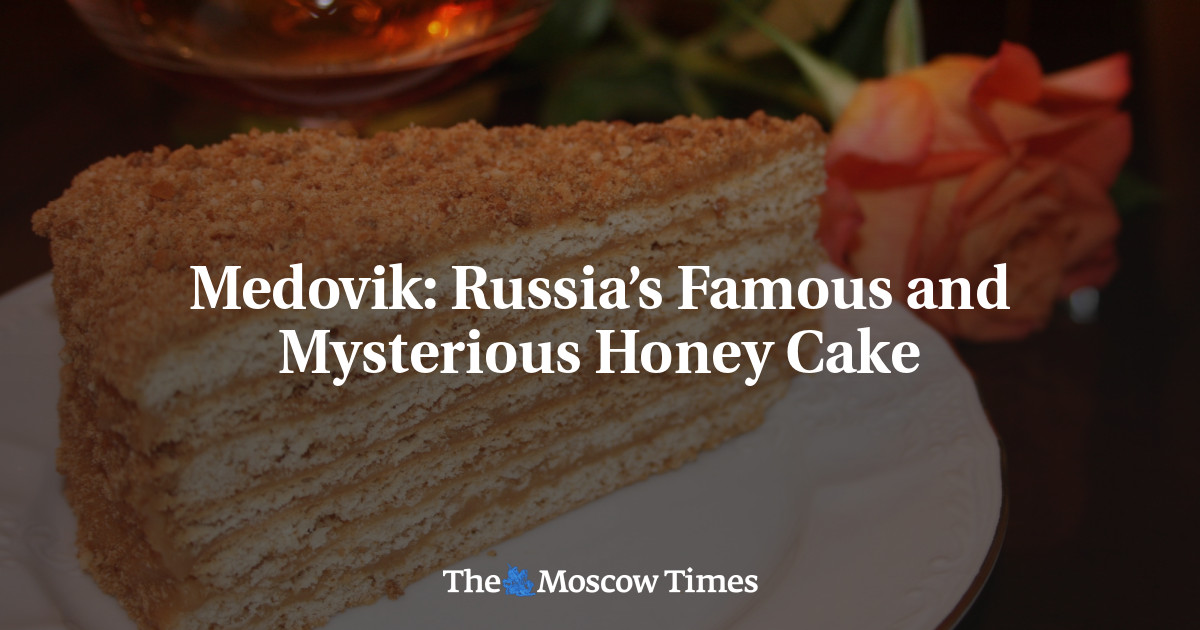 Medovik: the famous and mysterious honey cake of Russia

What is the most famous dessert in Russia? Most people would answer without hesitation: medovik (honey cake). It takes us back to our childhood – it’s comforting and warm. Why do we love it so much? What is the secret of its appeal? Of course, it is the main ingredient that gives it its flavor and aroma: honey. We also love it because it’s the taste of gingerbread, which has been passed down over the centuries and is now part of our genetic heritage.

Our mothers and grandmothers called it ‘red cake’, ‘little bee’ and ‘honey fluff’, but whatever they called it, it’s medovik. The recipe for medovik is usually passed down from generation to generation. It can be prepared in countless variations: hazelnut, caramel and chocolate, it’s a blank slate for experimentation.

Chefs of Moscow restaurants also like to add something unique to the recipe. Before the war started in February, they even organized whole medovik festivals. Some added mashed banana to the batter, others added prunes. Chefs put truffles in the icing, or decorate it with meringue and honeycomb, and even gold leaf. There were all sorts of exotic versions, like medovik liver: a paté of chicken liver between two layers of cake with fig jam on top. Where are all those rich releases now?

In short, medovik is wonderful. The only question concerns its origins. One version on the Internet is that Russia owes a debt of gratitude to the wife of Alexander I, Elizaveta Alexeyevna, for medovik. The story has been around for a long time, and the same story is told about Austrian imperial cake, Kyiv Ukrainian cake, etc. In all of them, a new chef heard nothing or understood nothing, but the result is a culinary masterpiece for the ages. In the case of medovik, the tsarina would have been the victim of a new leader who did not know that she hated honey. But after one bite, her anger turned to delight as she fell in love with this new “Russian” flavor (which she hadn’t known since she was Princess of Baden before her wedding).

Naturally, this story is not confirmed in any historical source or memoir and is, in general, highly improbable. To begin with, the idea that there would be an assistant cook or a new cook unfamiliar with the tastes of the family at the table of Alexander I is pure fantasy. Even Marie-Antoine Carême, specially invited from France in 1819, was never allowed to cook for the Tsar despite working in the palace kitchen for several months. Alexander I generally disliked new faces around him. In addition, a skilled and experienced doctor, Jacob Villier (later president of the Medical-Surgical Academy), exercised strict control over the food of the royal family.

But there are even more obvious reasons why the “Elizabeth’s favorite honey cake” story is clearly wrong. Until the middle of the 19th century, the only honey-based dough was for prianiki (gingerbread). No cook could imagine baking a gingerbread cake.

We cannot find special honey cakes in any early 19th century cookbook. We checked “The Cooking, Serving, Confection Making and Distilling Dictionary” (1795-1797) by Vasily Levshin; I. Navrotsky’s the “New Complete Cookbook” (1808), “The General Complete and Expert Confectioner” (1811) – nowhere are honey cakes mentioned. Fashion for them would come to Russia only almost a century later.

Medovik is not native to our cuisine at all, but it is a talented adaptation of a foreign cake that has won over Russians’ taste for honey. It was made frequently in the 20th century. But its peak was during the Soviet period, when it became everyone’s favorite homemade treat.

This is important: it was a homemade cake. It was not served in any cafeteria or restaurant in the Soviet Union. It has not been included in official catering recipe collections, or even in the “Book of Tasty and Healthy Foods”. It might surprise you that the first medovik recipe in Soviet cookbooks was published only in 1960 in the book “Ukrainian Dishes” published in Ukrainian in Kyiv. And a little later, the famous specialist in Ukrainian cuisine Darya Tsvek will publish dozens of variations of this homemade dessert.

Today you can find medovik in the best restaurants. But it’s even more delicious when your mother or grandmother prepares it and you eat it at their table.

This is our family recipe that we have been making since Soviet times. The dough is simple, the ingredients are at hand, the main ingredient is honey, but not too much. It is prepared the day before cooking. But then the cake still needs to infuse and absorb the frosting.

Before you begin, here are some general tips:

You can use any honey, fine or very thick. Both melt when heated.

Heat the ingredients until the sugar is completely dissolved

Do not “activate” baking soda in a spoonful of acidic liquid. It will start working when the ingredients are heated. Honey is an acid medium for soda.

Let the cake soak up the flavors for about 12 hours. Better yet, prepare it the day before. Medovik takes time. But then what a magical aroma of honey and caramel-sweetened milk!

You can buy dulce de leche, but it’s easy to make.

Note: you can boil several cans at the same time in one pot, but make sure they are not touching each other and that there is enough space around each can.

Would you eat carrot cake made with “imitation carrot chunks”? – Twin towns