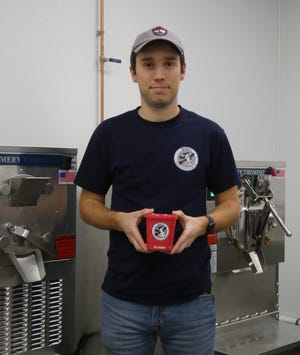 Today, the five-year-old company is preparing to open its own retail site.

Mark’s Homemade Ice Cream has announced its intention to open a “scoop shop” in downtown Bucyrus. The announcement was made via the company’s Facebook page. Pfeifer could not be reached for comment on Thursday

In addition to premium ice cream, the new store at 201 N. Sandusky Ave. will offer “some other ice cream items,” according to the post.

Its opening is scheduled for this summer.

Jessie Furner, executive director of the Bucyrus Area Chamber of Commerce, said the building, which has drive-thru, was built to house an ice cream shop, BJ’s, and later housed The Daily Scoop.

â€œI absolutely think it will be a great choice for downtown,â€ she said. “Everyone is excited.”

Furner said Pfeifer’s success as an entrepreneur is a great source of inspiration for young people in the community.

Pfeifer started making ice cream in 2016, while still in college, he previously told TF. The schedule worked pretty well: he sold ice cream in a truck in the summer, then returned to class in the fall. His parents, Ed and Jenny Lynne Pfeifer, are his partners in the business.

A second truck was added in the summer of 2017. After Pfeifer graduated from college in 2018, both trucks were open all summer. In August 2019, Mark’s added a kitchen space in the Southern Lights Mall on Marion Road, then began selling pints in local stores in February 2020.

Joyce and Tommie Rarick have operated The Daily Scoop on the new site for many years. The property is owned by Bakers Real Estate Investments, who purchased the property from the Raricks in December 2018, according to the Crawford County Auditor’s Office website records.

A spokeswoman for Baker’s Pizza said Mark’s would lease the property. Owner Breck Baker could not be reached for comment.