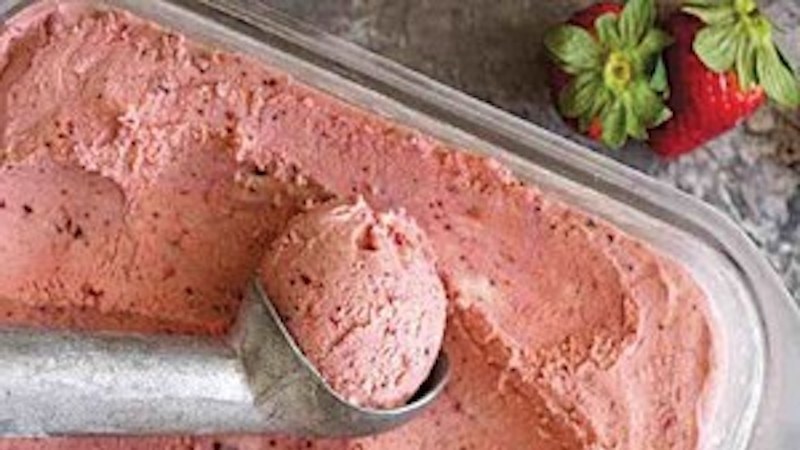 This summer I noticed that, at least in the US where I live, the internet is going crazy for homemade ice cream. We had extremely hot days this year so making these ice creams was impossible to avoid, especially with the internet making sure it was exactly what you were doing.

Of the ones I’ve started making, mason jar ice cream—which only requires two key ingredients, heavy cream and sugar—turned out to be quite delicious. For more flavor, you can add melted chocolate and/or fruit, then shake the jar vigorously for five minutes. After that, place it in the freezer for 3-4 hours. The result is incredible.

While I loved this ice cream, it was the non-churning Mexican ice cream that captivated me even more. The recipe for this is simple, comes with an elaborate story, and is simply to die for. It’s so soft and silky it’s hard to believe it’s not machine made.

In his book Mexican ice cream, Fany Gerson, while telling the story of this dessert, says that in pre-industrial times in Mexico, snow from the tops of volcanoes was mixed with fruit to make ice cream. As the snow had to be insulated, to prevent it from melting, this ice was reserved only for members of the royal family and the elites.

The Industrial Revolution made ice cream more accessible, and ice cream followed in terms of availability. While it’s true that average people could now eat ice cream, the Mexican method of making ice cream differentiated it from that made in large industrial machines. Mexican no-churn ice cream has a unique texture and taste, as it is handmade and more akin to ice cream made by Italians, many of whom immigrated to Mexico in pre-industrial times. This method, at some point, may be phased out as machines continually replace humans.

You don’t need an ice cream maker for this rich and decadent Mexican ice cream.

Mexican ice cream parlors use garrafas, which are large metal cylinders placed inside wooden containers with ice and salt. A mixture of heavy cream, condensed milk, and fruit or flavors of your choice is placed inside the cylinder, and it is stirred by someone with a very large wooden paddle, instead of being churned by machine, until rich, creamy and frozen.

Mexicans are fond of flavors in both savory and sweet dishes. The fruits are abundant in the country, and many of them are used to flavor dishes and desserts such as ice cream. The process of garrafas is laborious but the taste is unique, and savoring it you might be fascinated that a machine hasn’t done it.

These days, you can make no-churn Mexican gelato at home. However, the process is not very labor intensive, as you don’t need garrafa. This version is so simplified that you could make it every day and eat as much as you want. And since you’re making it yourself, you can control what goes in and choose healthier options like good quality fruit and sugar or alternative sweeteners.

Personally, I’m not that big of a fan of very sweet stuff, so I tend to use less sugar than the average person. I also made this recipe using sweetened coconut condensed cream instead of regular condensed milk, so it’s possible to experiment with non-dairy ingredients as well. However you prefer your ice cream, I’m sure you’re more than ready to learn how to make this delicious Mexican ice cream.

A pinch of salt

Whichever way you choose, empty the cream into a large mixing bowl after whipping it. Now repeat the process with the other cup of heavy cream and once whipped add it to the mixing bowl. Now slowly stir the condensed milk into the whipped cream, without trying to get too much air into the mixture. Don’t mix too much. Once well mixed, pour it into the loaf pan, cover tightly with plastic wrap, then aluminum foil, and freeze for 6-7 hours.

While the ice cream freezes, put the sugar and water in a saucepan over low to medium heat. In about 2-3 minutes when it turns into syrup, add the strawberries and stir for a minute. Then, turn off the stove because the fruits can leave water, and when they cool, put them in the refrigerator. Once the ice cream is frozen, pour this syrup and the fruit over it. Sprinkle with toasted almonds and serve. Enjoy a really hot summer day, or any day!